Janet Skirving was born and raised in St. John’s, Newfoundland. She is the youngest of three daughters, and completed all of her schooling on the island including studies at Memorial University of Newfoundland. Janet graduated in 1987 with a Bachelor of Arts degree in French and English Literature. Growing up on the island she quickly developed the travel bug and has always been fascinated with different cultures and languages. She began her career as a flight attendant in 1988 and now, many years later, still thoroughly enjoys the path she has chosen. She and her husband now live in Guelph, Ontario. 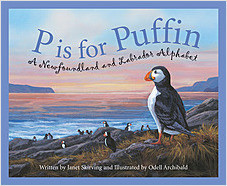 P is for Puffin: A Newfoundland and Labrador Alphabet