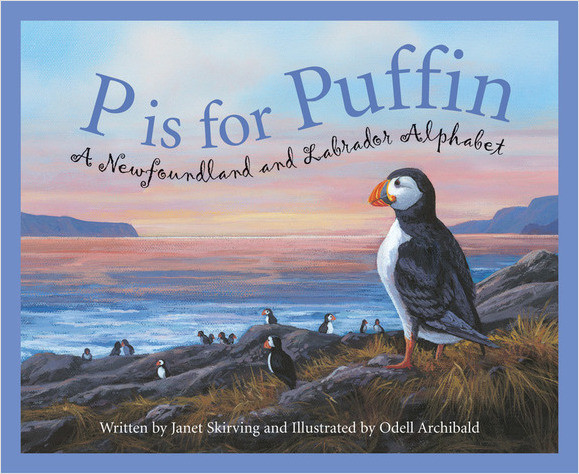 P is for Puffin

A Newfoundland and Labrador Alphabet

If someone should ask you "Where you 'longs to?," he's probably from Newfoundland and Labrador, and he wants to know where you are from. The name of this exotic and wonderfully unusual province was officially changed to include Labrador in 2001. P is for Puffin takes children on an alphabetical tour of this fascinating land, where they can see 60-foot icebergs and 22 varieties of whales, make music on an accordion or an "ugly stick," taste such delicacies as seal flipper pie and moose stew and hear of a history that's rich with Viking explorers, shipwrecks, and pirates' treasures.

P is for Puffin: A Newfoundland and Labrador Alphabet - Teaching Guide

Janet Skirving was born and raised in St. John's, Newfoundland. She is the youngest of three daughters, and completed all of her schooling on the island including studies at Memorial University of Newfoundland. Janet graduated in 1987 with a Bachelor of Arts degree in French and English Literature. Growing up on the island she quickly developed the travel bug and has always been fascinated with different cultures and languages. She began her career as a flight attendant in 1988 and now, many years later, still thoroughly enjoys the path she has chosen. She and her husband now live in Guelph, Ontario.

Odell Archibald grew up in the small town of Stephenville Crossing, and is the youngest of 11 children. Odell paints almost daily, drawing inspiration and ideas from her familiar surroundings and personal memories. Exactly one year after taking lessons she produced her first limited edition print. Since that time she has produced other reproductions from her original work. She has done many original commissions, working mainly with acrylic. Odell lives in Kippens located in Western Newfoundland, and her love for family and country living is reflected in her work.