Lightning jumping from a 200-foot radio broadcast tower and dancing into the studio was enough to jumpstart Pat’s career in weather. When he was just 15, Pat worked at a radio station in southern Georgia that was knocked off the air more than once by lightning.

As a meteorologist, Pat has tracked many storms, once reporting from the inside of Hurricane Bertha in Florida during a trip on a C-130 hurricane hunter plane. Following his 15-year career at WKMG in Orlando, Florida, Pat traded Florida thunderstorms for lake effect snow when he moved to Michigan. While the chief meteorologist at WLNS, a CBS television affiliate in Lansing, Michigan, Pat often watched the winter thaw give way to spring tornadoes and spent hours on air tracking their movements.

When Pat isn’t on the air, he spends time talking to schoolchildren about weather and television forecasting. He has always wanted to write about the power of weather. Pat lives in Winter Springs, Florida. 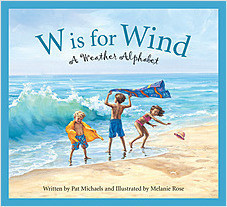 W is for Wind: A Weather Alphabet