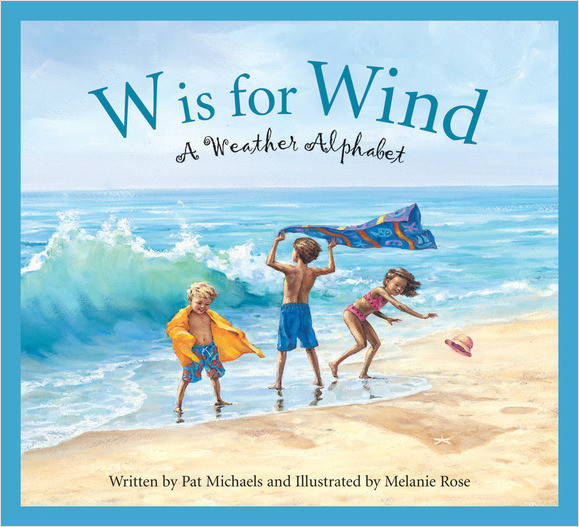 W is for Wind

Would you like to know the difference between cirrus and cumulus clouds? How much does our atmosphere weigh? W is for Wind: A Weather Alphabet is a swirl of information that answers these questions and many more. Readers will learn that yes, our atmosphere has weight! And if it's sunny, chances are it's heavy. When the atmosphere is lighter, grab your galoshes! W is for Wind is one well-informed children's book from the Sleeping Bear Press family that puts the emphasis on fun and function. It lets children learn all about the weather in a relaxed engaging manner. Professional weatherman and storm tracker Pat Michaels spins the stories on everything from tornadoes and hurricanes to rainbows and evaporation with gusto. His rhymes thunder through the alphabet with excitement and his factual text resonates like the Northern Lights. Readers will turn the pages with lightning quickness to get to the next weather condition and with each page turned they'll be treated to the mystical illustrations of Canadian-born artist Melanie Rose. Perfect in the classroom or the home, W is for Wind captures the love affair we all have with weather. It the perfect complement to a science lesson or to help explain to children what exactly happens when water freezes and much more with easy-to-understand language. Enriching, enlightening and educational could easily be the "E" in this one-of-a-kind weather alphabet book.

W is for Wind: A Weather Alphabet - Teaching Guide

Lightning jumping from a 200-foot radio broadcast tower and dancing into the studio was enough to jumpstart Pat's career in weather. When he was just 15, Pat worked at a radio station in southern Georgia that was knocked off the air more than once by lightning.As a meteorologist, Pat has tracked many storms, once reporting from the inside of Hurricane Bertha in Florida during a trip on a C-130 hurricane hunter plane. Following his 15-year career at WKMG in Orlando, Florida, Pat traded Florida thunderstorms for lake effect snow when he moved to Michigan. While the chief meteorologist at WLNS, a CBS television affiliate in Lansing, Michigan, Pat often watched the winter thaw give way to spring tornadoes and spent hours on air tracking their movements.When Pat isn't on the air, he spends time talking to schoolchildren about weather and television forecasting. He has always wanted to write about the power of weather. Pat lives in Winter Springs, Florida.