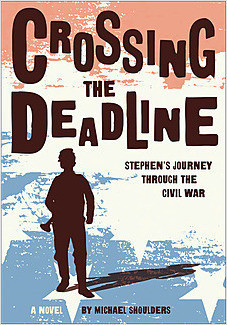 In this highly relatable work of historical fiction, Shoulders brings to life one of the darkest chapters in American history: the Civil War. The narrative revolves around 13-year-old Stephen Gaston, who manages to enlist in the Union Army to support his mother, despite being underage. As a personal bugler for a major in the Ninth Indiana Cavalry, Stephen must act as his company’s timekeeper—both during daily activities and on the battlefield. The story is told from Stephen’s point of view and is full of historical details. As the character experiences training, battle, and imprisonment, readers are privy to what it must have been like to experience war from a soldier’s perspective. Like young Stephen, most enlistees are eager to “see the elephant” (be part of a battle), but their excitement fades as the realities of mosquitoes, heat, and constant drilling set in. The novel covers very little of the Battle of Sulphur Branch Trestle, instead focusing on the horrendous conditions after the Ninth is forced to surrender. Life in “Camp Morgan” is almost unimaginable: the men must deal with outbreaks of dysentery and lice, flooding has made proper sheltering impossible, and overcrowding makes food so scarce that the men resort to eating rats. Through so much misery, the author is still able to evoke feelings of empathy and hopefulness. Faith in humanity is demonstrated throughout: soldiers unselfishly make sacrifices to take care of one another, and even the guards, whose lives are not much better than the prisoners’, are presented in a sympathetic light. VERDICT A sensitive and detailed portrayal of a Civil War soldier’s life.