No Year of the Cat 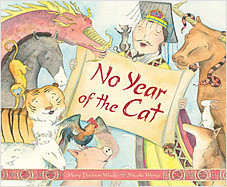 One night last year, you went to bed and woke up a year later.

It wasn’t magic or because you were really tired. It happened because it was New Year’s Eve: you went to sleep in 2012 and woke up to 2013. Next December, you’ll do it again with a whole new year.

If you lived in China, you’d call this the Year of the Snake. The Horse follows, then the Sheep, Monkey, Rooster, Dog, Pig, Rat, Ox, Tiger, Rabbit and the Dragon. But something’s missing, and in the new book No Year of the Cat by Mary Dodson Wade and Nicole Wong, you’ll find out why.

The emperor had a problem.

Everybody in his empire knew the seasons. They understood time to plant and time to rest. But they couldn’t remember the years, which meant that no one could recall when floods or storms happened. And since the prince was born in this auspicious year, not remembering was a problem.

So the emperor, who was very wise, devised a plan.

“We will have a race!” he said. “The first twelve animals to cross the great river will each have a year named for them.”

So on the big day, all the animals gathered on the shores of the river. Cat and Rat were there, and they were scheming. They decided to ask Ox to carry them across on his wide, strong back.

Ox agreed, and Cat and Rat scrambled up. They all plunged into the river and Ox began to swim hard and fast. He was way ahead of all the other animals, so when he stumbled up on the other side of the water, the emperor declared that Rat was first and Ox was second.

Tiger arrived with a droopy tail. Rabbit took the easy way across. Dragon stopped to help some farmers, so he was fifth. Snake slithered in, then Horse, Sheep, Monkey, Rooster, and Dog. Pig trotted up and took last place, telling the emperor that he was late because he was hungry.

The emperor smiled. His empire now had a way to remember the years (especially the auspicious ones). All the animals were very happy – except for Cat. She had totally missed being counted. Where had she been all that time?

Kids will giggle when they find out the answer and what happens, because No Year of the Cat is a very likeable book.

Basing her story loosely on an ancient traditional Chinese folktale that’s “familiar … in the Chinese culture,” Wade offers children an explanation for the 12-animal cycle in the Chinese calendar and why those specific animals were chosen. I loved the different personalities that each animal gets here, and I loved the way the story is woven in with Wong’s Asian-inspired illustrations.