Booklist - The Boy Who Grew a Forest 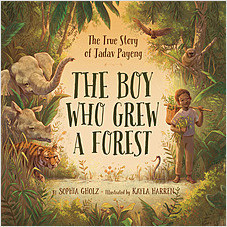 Adding to a growing corpus of biographies of unsung heroes, this timely tale highlights the connection between people and the environment. As a young boy, Jadav Payeng noticed that the sandbars around the river island on which he and his family lived were rapidly shrinking, leaving animals stranded and dying. He sought the wisdom of the village elders, who told him that the only way to help the animals was to build them new homes. They gave him 20 bamboo saplings to plant. Now, 40 years later, he is known as “The Forest Man of India” and his efforts have resulted in the rejuvenation of acres of forests, home to elephants and tigers and countless other creatures. Payeng’s story is eloquently told and beautifully illustrated. It will inspire readers to recognize the power of individual determination and can be paired with Wangari Maathai: The Woman Who Planted Millions of Trees (2015), by Franck Prévot, and The Secret Kingdom: Nek Chand, a Changing India, and a Hidden World of Art (2018), by Barb Rosenstock.