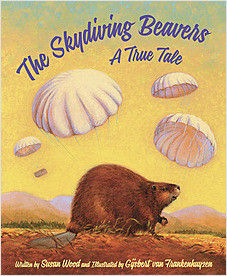 An Idaho game warden invents an ingenious solution for a growing town’s wildlife problem in this tale set in 1948 Idaho.Characterized as “a lovely place” and so portrayed in van Frankenhuyzen’s golden meadows and hilly vistas, the town of McCall would be idyllic—except that humans “muscling in” on the local beavers’ habitat means that it is vulnerable to flooded roads and downed trees. What to do? Enter Elmo Heter, a beaver expert with a notion that the remote Chamberlain Basin would be a fine place for beavers to live. Wood spins the tale as a yarn (“But Elmo had a problem. A big problem. A big, transportation-type problem”) but sticks to historical records in describing how Heter considered and rejected various ways of safely moving the beavers before designing and (with the unwitting assistance of a beaver he calls Geronimo) testing a box that could be parachuted from an airplane and would open automatically upon landing. In her closing note the author reports that the successful airlift moved 76 beavers all told. She also perceptively suggests that communities today would more likely opt either to exterminate or, better, find ways of coexisting with local fauna. Human figures in the illustrations are all white. A true “tail” with a happy ending. (beaver facts, source list) (Informational picture book. 6-8)