A Review of "Twice as Good" in Kirkus Reviews 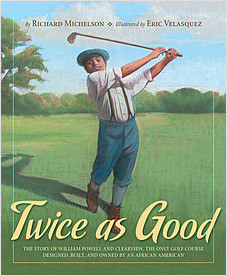 Despite growing up in a community that was racially segregated, William Powell persisted in playing the game he loved, golf.

Young Willie could only caddy on the golf course near his Ohio home, although one white man did let him play. Returning home after World War II from England, where he golfed as much as possible, William was barred from the local greens, denied membership in the whites-only (until 1961) PGA and turned down for financing from the GI loan program. Nonetheless, he found a piece of land where, with private financing, he designed and built the first integrated golf course in the United States. Clearview opened in 1948 and is now a National Historic Site. When his daughter was born, he designed a golf club just for her. Michelson, the author of As Good As Anybody (illustrated by Raul Colón, 2008), has written a straight-forward narrative spiced throughout with inspirational thoughts. At one point, Willie’s principal tells him that in order to succeed he must be “twice as good” as the white children. Velasquez, the award-winning illustrator, paints his figures in linear poses that are unfortunately more static than active.

A useful title in which young readers can gain an appreciation of a ground-breaking African-American sports figure. (author’s note) (Picture book/biography. 3-7)