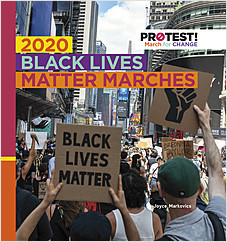 This volume, the first of six in the Protest! March for Change series, places readers into one of the many Black Lives Matter (BLM) crowds that took to the streets in summer 2020, following the murder of George Floyd. Markovics sets the scene with examples of chants and protest signs, her text set upon immersive, full-bleed photography of protestors marching. The book focuses on the concept of structural racism, briefly referencing Jim Crow, segregation, and the civil rights movement before continuing to the series of higher-profile murders that fueled the BLM movement—those of Trayvon Martin, Michael Brown, Eric Garner, Tamir Rice, Breonna Taylor, and many others here unnamed—then returning to George Floyd in more detail. A surface-level but poignant introduction to BLM, with striking photography and design, though the choice to
capitalize “white” may concern some.