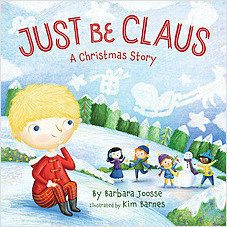 “Little Clausie has always been different—but that turns out to be a good thing for everyone in town. When young Clausie is born, he doesn’t look like the other babies, and he doesn’t cry. By age 6, Clausie is even more unusual. He wears the same red outfit day after day. His laugh is different. He is so considerate that he can’t play competitive sports. And his dog, Dasher, is very, very big. In Clausie’s “supersecret” workshop, he and Grannie make toys and doodads. It’s Grannie who assures him that being different is wonderful: “You’re one of a kind!” But Clausie isn’t convinced. When a major snowfall closes the roads and the train tracks just before Christmas, Clausie worries about all his neighbors who won’t receive their gifts from family members far away. Clausie makes a plan. His family helps him get ready, and Dasher helps him with deliveries…and the whole town is delighted with what becomes the beginning of a tradition. Grannie was right: His differences make others happy. With energetic strokes and expressive gestures, Barnes’ illustrations are lively and engaging. The story’s sweet message of self-acceptance combines well with the idea that Santa could be a legend based on a very thoughtful person. Clausie and his family are depicted as White; there is some racial diversity among the townspeople and friends. A refreshing angle on the (very) oft-told tale.”