School Library Journal - How the Heck Does That Work?! 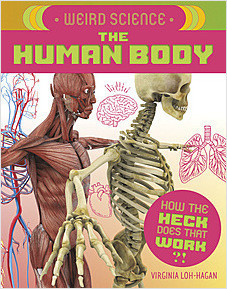 “The weird and unusual attracts science enthusiasts and even the uninterested. Books in this set feature large images of electric eels and carnivorous plants, as well as details about military parachutes and radio telescopes. Sidebars delve into related topics like the presence of dark matter in foods, scientist profiles, or species diversity in rainforests. Each title includes a “Test It Out” activity idea, such as bouncing sound waves to learn more about echolocation. Topics include animal camouflage, stop-motion photography, and diamond rain on Jupiter. Colored text highlights terms found in the glossary for easy reference. Whether readers are interested in animals or military hardware, there are plenty of topics to choose from in this series. VERDICT Great for reluctant readers and STEM buffs alike, while also useful for classroom science units.”