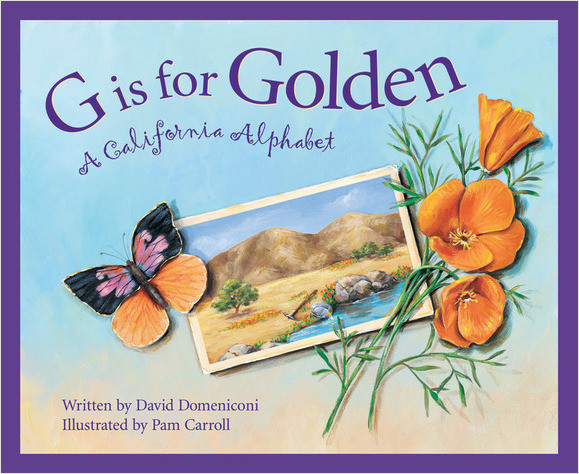 G is for Golden

Columnist David Domeniconi has researched close-to-home topics for his new book, G is for Golden: A California Alphabet. This is David's first children's book and it contains 40 pages of entertaining and educational facts about California. David captures California on so many fronts - its natural history, social sciences, inventors, and even its forty-niners. On the T is for Television page, the reader discovers Philo Farnsworth, a 21-year-old farmer who gleaned the idea to transmit the world's first television picture by looking at the patterns in the rows he had plowed in his field. Another California first was the creation of the United Nations Charter, signed by representatives of 50 countries at the San Francisco Opera House in 1945. Readers of G is for Golden also learn about the world's largest find of Ice Age fossils at the La Brea Tar Pits, the 21 missions that line El Camino Real, Cesar Chavez's vision, and Rodia's Watts Towers. The series employs a two-tiered approach to reach all students from Pre-K through 4th grade. A rhyme for each letter of the alphabet captures the attention of younger readers, while older students read the expository text on the same page and gain a richer understanding of the topic. About the Author: David Domeniconi is a third generation San Franciscan. He graduated from San Francisco State College with a degree in Anthropology, and studied creative writing at San Francisco State College. His illustrated travel column, "Travelog," is a regular feature in the Santa Barbara News Press. About the Illustrator: California native Pam Carroll was a finalist in Artist's Magazine's Still Life category for the past two years. Her distinct style of realism and appealing use of light creates an enchanting visual experience for children. G is for Golden is Pam's fourth children's book with Sleeping Bear Press.

G is for Golden - Teaching Guide

David Domeniconi grew up in San Francisco and graduated from San Francisco State College. He is a writer and illustrator whose work has appeared in several West Coast publications. His illustrated travel column, "Travelog," is a regular feature in the Santa Barbara Press. He lives in Carmel-by-the-Sea with his wife, Janet.