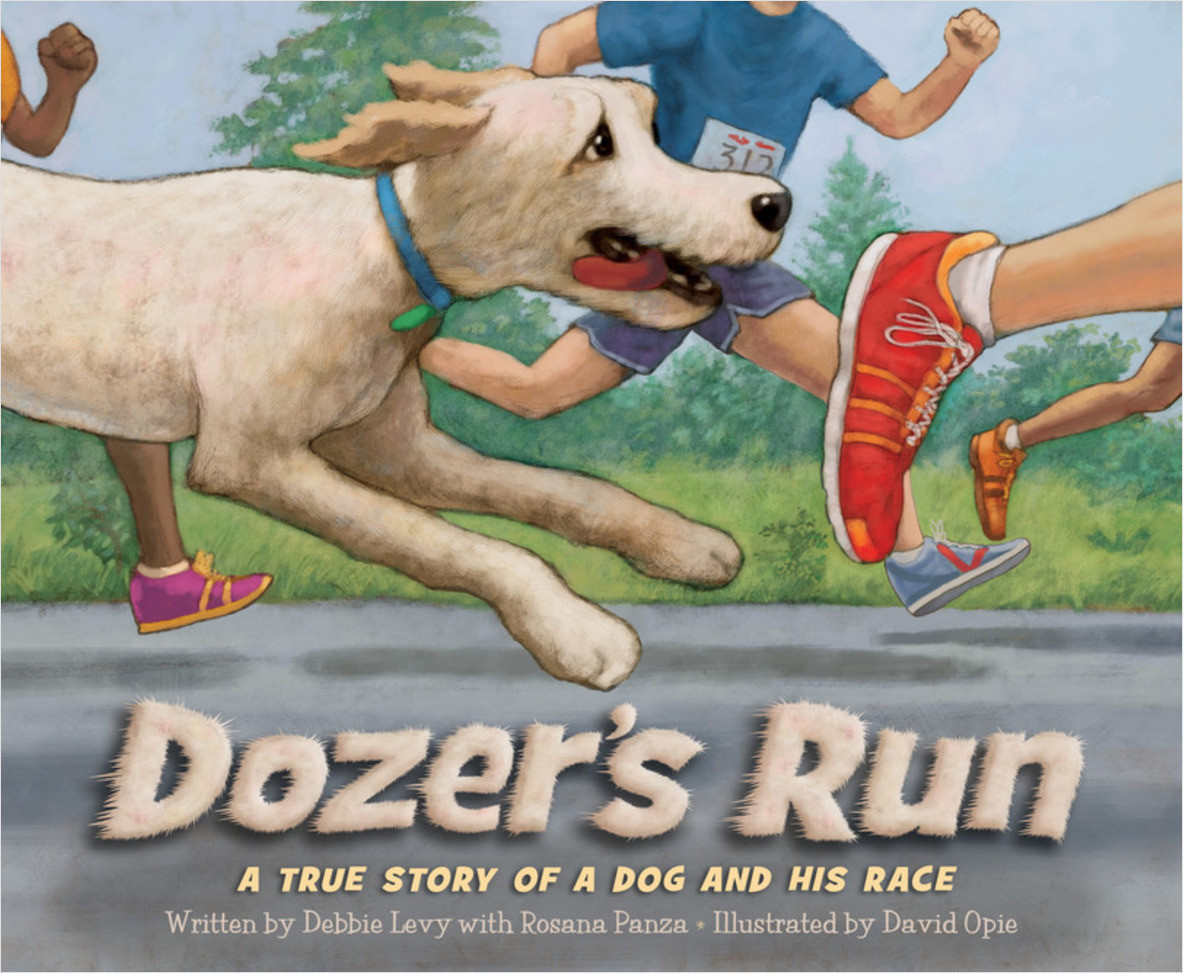 A True Story of a Dog and His Race

Dozer the Goldendoodle has a wonderful life! He and his best friend, Chica, belong to a loving family. They have warm beds to sleep in, enough food to eat, and plenty of room in their yard to play and investigate. What more could a good dog want? As it turns out, Dozer wants an adventure. And when a runner runs past his yard, followed by another, and another, and another, Dozer decides to follow and see what is happening. In May 2011, unbeknownst to his owner, Dozer slipped out of his yard in Highland, Maryland, enticed by the sight of people running past. The runners were participating in the Maryland Half Marathon, a race benefitting the University of Maryland Greenebaum Cancer Center. Dozer joined the 2,000 runners in the race, inspiring everyone along the 13-mile race course. By the time his adventure was over and he was reunited with his family, Dozer's "Run" encouraged thousands of pledges in support of the Greenebaum Cancer Center. This true story of a playful dog that actually runs a half marathon entertains as well as inspires.

K-Gr 3—The annual Maryland Half Marathon is a fund-raiser for the University of Maryland Greenebaum Cancer Center. Thousands have participated over the years to raise over $1.5 million dollars, but the single biggest booster ran the race only once: Dozer the Goldendoodle has generated more than $25,000 since his “accidental” run back in 2011. Author Levy and Panza, Dozer’s owner, recount the Sunday morning in May when Dozer inadvertently and unbeknownst to his family joined the race as it passed by his house. Told in third person and laced with italicized “Dog Think,” the story follows Dozer and the runners as they make their way toward the finish line. The simple narrative concludes when the Panzas are visited by race organizers a few days later to award Dozer an honorary medal. Some fictionalizing occurs, with Dozer described as feeling lonely and sad after no one rewards him after the race. The detailed author’s note, which fills out this inspirational tale, explains that no one knows what happened to Dozer immediately after the marathon. The note also includes a video link of Dozer crossing the finishing line that readers won’t want to miss. The traditional illustrations, done in pencil and digitally painted, capture the initial exuberance of the dog and runners, as well as the strain and doubt of the final miles of the race. Readers will surely be motivated by this book to “take steps, big and small, to help others.”

This is the true story of Dozer, a three-year-old goldendoodle who became a local celebrity when he spontaneously started running alongside participants in a half-marathon fund-raiser for cancer research. Levy and Panza write from Dozer’s perspective and remains true to canine sensibilities, with an emphasis on interesting smells, curious strangers, and the pure fun of chasing, racing, and playing tag. Throughout, the author avoids attributing altruistic intentions to the dog’s actions, and the result is in an engaging, believable tale that will resonate with young readers and listeners. The mostly full-page, mixed-media illustrations nicely mirror and extend the progressive action in the words. With obvious appeal to animal lovers, this could also be used to start conversations about empathy and community activism. Similar in tone to Alexandra Day’s Carl series of wordless picture books, this tribute celebrates dogs at their best and could be used as a bridge to independent nonfiction reading selections, such as Donna Jackson’s Hero
Dogs: Courageous Canines in Action (2003).

In this true story, a goldendoodle named Dozer runs away from home and then runs a half marathon, becoming a celebrated canine mascot and fundraiser for cancer in the process.
Dozer is outside in his own rural yard in Highland, Md., when runners from the Maryland Half Marathon begin running by. The spunky dog joins the group of 2,000 runners, continuing on for almost the entire 13-mile race. His family has no idea he left to join the race, and he is gone for 24 hours before finally limping home. Within a few days, race officials track him down and present Dozer with a marathon medal. An author’s note explains that Dozer was filmed crossing the finish line with the other runners, leading to hundreds of pledges in his name that raised $25,000 for a cancer center in Maryland. The text of the story is rather wordy but also amusing, with emphasis on all the smells that entice Dozer along on his run. Soft-focus illustrations add humor with anthropomorphic expressions on Dozer’s face and realistic views of marathon runners in action. The intriguing nature of Dozer’s celebrity and effectiveness as a fundraiser for the cancer center is conveyed through the author’s note rather than through the story and illustrations, but Dozer is a charmer nonetheless.
Owners of goldendoodles, Maryland residents and families with runners will find this story touching. (Picture book. 5-8)

Debbie Levy is the author of many books for young readers, including We Shall Overcome: The Story of a Song and The Year of Goodbyes. A former newspaper editor and lawyer, she loves to read, kayak, and take long walks with her dog. Debbie lives in Maryland with her husband.

Rosana Panza is the mother of three—sons Nick and Tyler and, of course, Dozer. She calls her family her most wonderful and blessed achievement. The message she would like children to get out of Dozer’s incredible journey is that “miracles do happen” and to keep faith and hope close to one’s heart. Rosana lives in Ocean Pines, Maryland.

Illustrator David Opie grew up in Virginia’s Shenandoah Valley. He earned his BFA in illustration from the Rhode Island School of Design and his master’s degree from the School of Visual Arts in New York City. David and his wife live in Stamford, Connecticut, with their dog, Django.