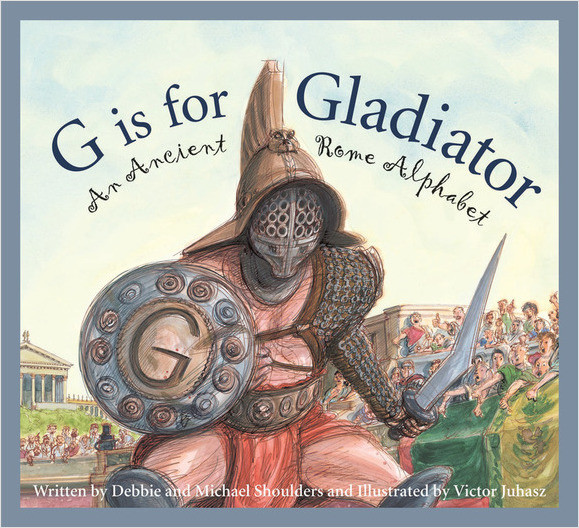 G is for Gladiator

According to Roman legend, what famous twins were raised by a she-wolf? Who wrote the epic poem, The Aeneaid? What famous leader brought law and stability, yet was stabbed to death by a group of senators? Life in ancient Rome was certainly not for the faint of heart! In G is for Gladiator: An Ancient Rome Alphabet, readers are given an A-Z introduction to ancient Rome, including its social, political, and civil customs and practices. Husband-and-wife writing team Debbie and Michael Shoulders explore topics such as Roman law, architecture, mythology, and of course, the ultimate "fight club" (gladiatorial combat). From the relaxed surroundings of the public baths to the rigid codes of the military legions, Rome's ancient civilization is unveiled. Colorful, entertaining artwork from Victor Juhasz, the illustrator of Z is for Zeus: A Greek Mythology Alphabet, brings it all to vivid life. Debbie and Michael Shoulders also coauthored D is for Drum: A Native American Alphabet. Debbie teaches middle school and reviews children's literature. An educator for 30 years, Mike now writes and travels year-round, championing literacy. He has written 10 books for Sleeping Bear Press. They live in Clarksville, Tennessee. Victor Juhasz's books include R is for Rhyme: A Poetry Alphabet and D is for Democracy: A Citizen's Alphabet. His work appears regularly in many major magazines and newspapers including Time, Newsweek, Rolling Stone, the Wall Street Journal, and the New York Times. Victor lives in Stephentown, New York.

G is for Gladiator - Teaching Guide