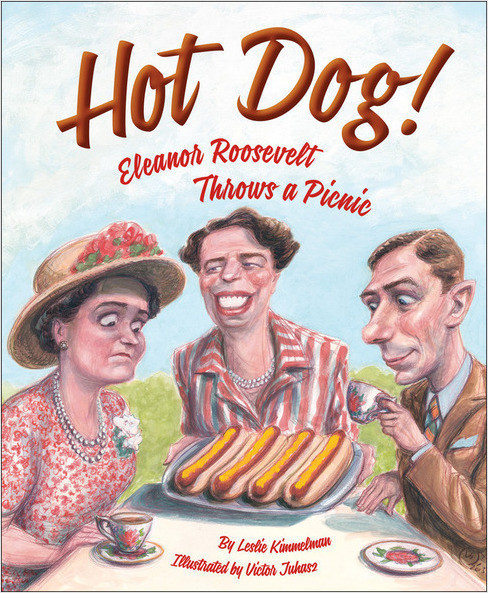 In June of 1939, the United States played host to two very special guests. British monarchs King George VI and Queen Elizabeth were coming to America. As it was the first visit ever by reigning British royalty, it was a chance for America to build a stronger relationship with the British, especially in those challenging times. On the domestic side, many people didn't have jobs, housing, or food. Internationally, Adolf Hitler, Germany's leader, was threatening the countries around him and war loomed on the horizon. But First Lady Eleanor Roosevelt saw the visit as an opportunity for America to set aside its cares for a while and extend a warm welcome and hand of friendship to the royal guests. As part of the festivities, Eleanor hosts an all-American picnic that includes hot dogs, a menu item that shocks some people.

Eleanor Roosevelt was known for lots of things, but her love of hot dogs probably isn’t one of them. This book remedies that by taking a little-known incident from history and turning it into a delightful picture book. When King George and Queen Elizabeth decided to visit the U.S.—the first time a British monarch had set foot on U.S. shores—Mrs. Roosevelt decided that, among other entertainments, a picnic in Hyde Park was in order. But when she said that she wanted to serve that quintessential American food, hot dogs, her menu choice became a subject of national discussion

Eleanor Roosevelt: First Lady, humanitarian, hot dog lover? Yes, indeed, says Kimmelman in a story built around a 1939 picnic the Roosevelts hosted for King George VI and Queen Elizabeth. Juhasz’s caricatures provide plenty of humor: during a stuffy White House dinner, Eleanor Roosevelt is seen dreaming of a mustard-covered frankfurter, and, later, the king and queen look quite green following a twisty, high-speed car trip through the New York countryside courtesy of F.D.R. However, this team doesn’t neglect the serious matters at hand, either (“Three months later, German tanks rolled into the country of Poland”), using the picnic to demonstrate the bond between Britain and the United States as war loomed. Ages 6–10.

This picture book recounts England’s King George VI and Queen Elizabeth’s 1939 visit to America. Eleanor Roosevelt is depicted as an active, tireless, and caring First Lady who can handle stately White House dinners proficiently enough, even though she prefers simpler fare. While specific source notes aren’t provided, Kimmelman references the letters available at the research library at Hyde Park, where the Roosevelts hosted the picnic honoring the royal guests. Snippets of the letters highlight the first couple’s down-to-earth qualities and Eleanor’s deft handling of the criticism she received for daring to serve hot dogs to the royals. From Queen Elizabeth’s dainty and tentative expression while eating her dog with a fork and knife to Eleanor’s wide smile and FDR’s pointed chin, the exaggerated features of the caricature illustrations amplify the humor and warmth generated from a meeting that would prove to sustain the leaders through the dark times of World War II.–Joanna K. Fabicon, Los Angeles Public Library

Eleanor Roosevelt was known for lots of things, but her love of hot dogs probably isn’t one of them. This
book remedies that by taking a little-known incident from history and turning it into a delightful picture
book. When King George and Queen Elizabeth decided to visit the U.S.—the first time a British monarch
had set foot on U.S. shores—Mrs. Roosevelt decided that, among other entertainments, a picnic in Hyde
Park was in order. But when she said that she wanted to serve that quintessential American food, hot dogs,
her menu choice become a subject of national discussion. In just 40 pages, Kimmelman does a pithy job of
presenting both this amusing incident and also what was happening in both the country and a world on the
brink of war. An author’s note gives more information, but there is no sourcing of quotes. The caricaturestyle
art presents a cast larger than life, and while it will evoke smiles, it is toned down in more somber
moments. A historical footnote that readers will enjoy.

When the first official visit by a British royal to the United States since independence is scheduled in 1939, Eleanor Roosevelt hosts an all-American picnic.
Fancy White House dinners for heads of state usually are too formal to allow for hot dogs on the menu, but for the first lady, the iconic American sausage is a favorite. She chooses the Roosevelt estate at Hyde Park as the perfect venue, planning it to the last detail with picnic staples of baked beans and, of course, hot dogs. Undeterred by the scathing commentary from across the country, Eleanor persists, creating a memorable afternoon that launches a long-lasting relationship between the once-warring nations—especially important during this period of impending war and economic upheaval. Caricature drawings capture the essence of the personalities and behaviors of the four main participants, Franklin and Eleanor Roosevelt and King George VI and Queen Elizabeth, while adding a sense of reality and amusement to the historically little-known episode. Kimmelman’s straightforward storytelling incorporates some basic explanatory facts and deftly brings this bit of Americana to life. An author’s note provides further context along with a statement that quoted correspondence can be found at Hyde Park; it is silent, however, on the authenticity of the Roosevelts’ dialogue.
A captivating introductory piece for budding history buffs. (Picture book. 7-12)

Leslie Kimmelman is the author of many books for children, including the recent Everybody Bonjours; Mind Your Manners, Alice Roosevelt! (a CELI finalist, Bank Street Best Children’s Book, and NCSS/CBC book); and The Little Red Hen and the Passover Matzah (a Sydney Taylor Notable Book), as well as a number of titles currently in production. Leslie has been a children’s book editor for more than twenty-five years, and is currently working as a part-time editor at Sesame Workshop. She has also written for a variety of parenting magazines, children’s magazines, and Web sites, and has penned numerous books for licensed properties (Nickelodeon, Disney, Sesame Street, and so on) under the name Jodie Shepherd.

Leslie grew up outside Philadelphia, graduated from Middlebury College with a BA in history, and now lives near New York City with her family.