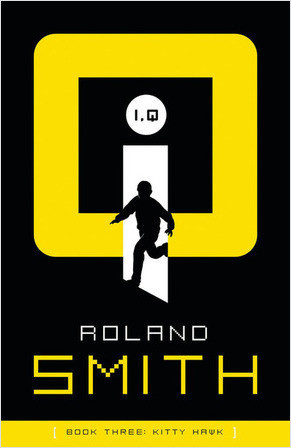 The president's daughter has been kidnapped by the elusive and lethal Ghost Cell. Quest (Q) and Angela are in hot pursuit with vicious winds and blinding rain thwarting them at every turn. It's a desperate high stakes chase. But who is chasing whom? Are Q and Angela the hunters or the hunted?

In the latest book in the “I, Q” series, Roland Smith showcases the kind of writing that has made him a favorite of young readers — believable characters, exciting plot, and writing that places the reader right in the middle of the action. This story picks up where “Book Two: The White House” left off — with the kidnapping of the president’s daughter.

Q and his new stepsister, Angela, are on the trail of the kidnappers. Q’s mother and Angela’s father are musicians, the famous kind. They just performed at the White House. They are oblivious to the adventures of their children.

Angela’s mother is a former Secret Service agent who went rogue. Or did she? Her story becomes an important part of the thrilling adventure.

Readers of this series will not want to miss even one book. New characters are introduced in this installment, and one of the best (and strangest) character duos — Boone and his dog, Croc — become more mysterious than ever. With the mystery yet to be revealed, readers will be anxiously awaiting the next book in the series.

It’s really unbelievable how Smith manages to make just a little over nine hours of drama into a whole book, but he does it really well. The action starts at midnight and is over (at least this episode is) by 9:15 a.m.

Part of the secret is including action from various points of view. When Q, as Quest prefers to be known, is telling his story, it’s a first person narrative. When Smith is narrating what happens to the others, it’s in third person. It’s not confusing at all, and the reader feels close to Q by learning about his quirks, his insecurities (does he tell Boone about his “itch”?), and his feelings during the adventure.

Roland Smith excels at showing, not telling. And it’s that talent that keeps the story going, literally minute by minute.

Please note: This review is based on the final paperback book provided by the publisher, Sleeping Bear Press, for review purposes. Read the blurbs on the back cover carefully. There is one quote from a review of the second book by this reviewer!