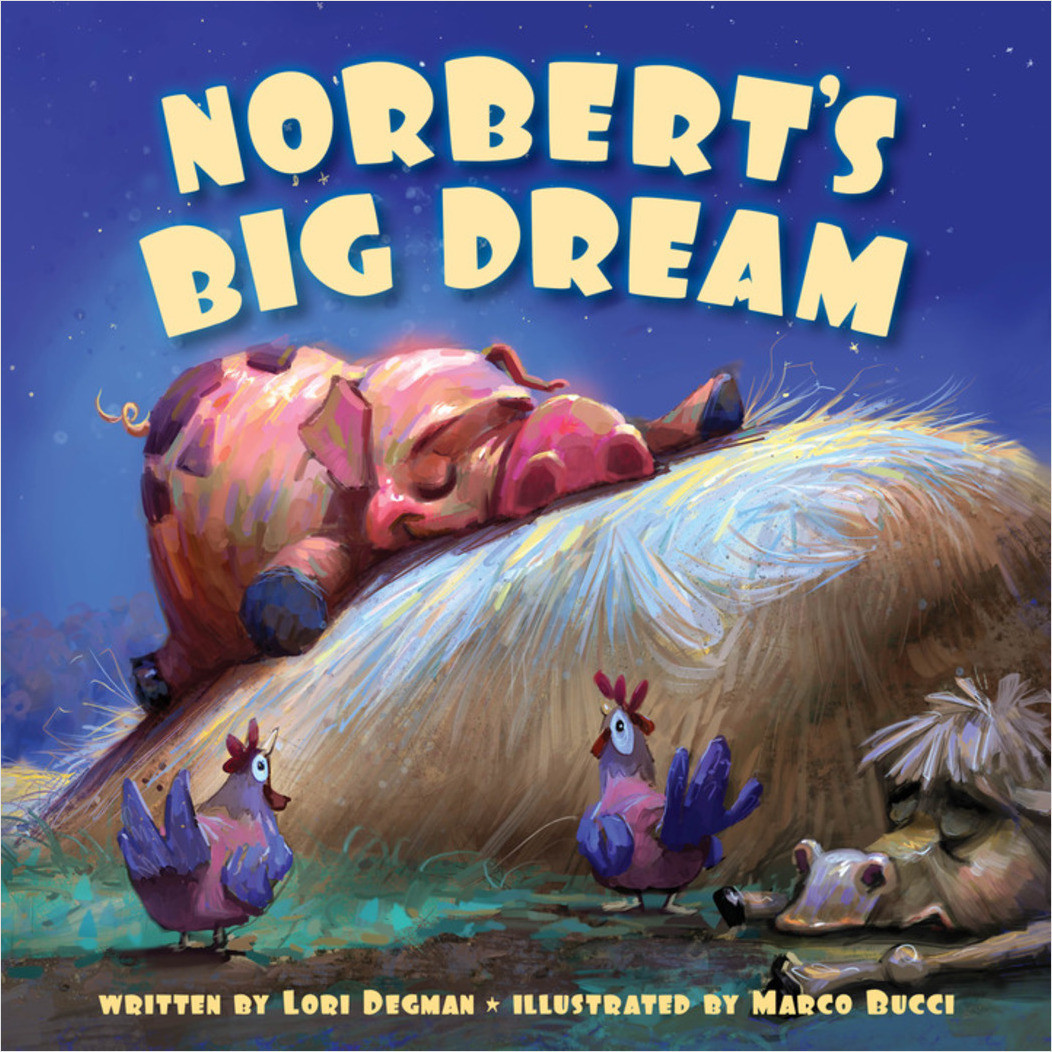 Norbert is a pig with a dream. It doesn't matter if the other farm animals snicker behind his back, Norbert has always dreamed of swimming the English Channel. He's been preparing and training and finally he's ready for the big swim! But where exactly is the English Channel?! Will Norbert have to give up on his dreams or will his friends come to the rescue after all? A sweet, funny story about dreaming big.

The expression “when pigs fly” is given a new twist as Norbert the pig dreams of swimming—not in just any pond, lake, or ocean, but the English Channel.Norbert trains day after day and dreams night after night until he feels ready. Despite the snickering, snorting, and squealing of the other pigs, Norbert dons his gear and announces he is ready. There’s just one problem: where is the English Channel? If he can’t find it, he can’t swim it! Deflated, he strips off his goggles and flippers and plods back to the farm. Wait! What’s this? A sign with an arrow pointing to “Norbert’s Channel”—a stream on the farm the other pigs have marked for him. Ahh, a dream come true. But is Norbert done dreaming? Of course not. The last page shows him summiting a snow-covered mountain—presumably Everest. Bucci employs visible, broad brushstrokes and vivid colors to define the images and create a glossy patina. The technique is somewhat unusual, lending an eye-popping energy. While most kids will not know (or possibly even care about) the English Channel, they will find Norbert’s antics to get there mildly humorous, and they will appreciate his friends’ affectionate indulgence. The message of dreaming big is secondary to the storyline, but Norbert is no stick-in-the-mud. (Picture book. 4-8)

While most pigs are satisfied with lolling around in the mud and sucking down slop, Norbert has other ambitions: “Since he was a wee piglet, Norbert dreamed of swimming the English Channel,” writes Degman (Cock-a-Doodle-Oops!). Norbert “practice[s] his flutter kick” in the mud, “munche[s] muscle-building foods,” and endures the taunts of his fellow pigs, who think his idea is ridiculous. But when the time finally comes to put his plans into action, there’s just one problem: where exactly is the English Channel, again? Using bright, thick, painterly swaths of color, Bucci brings Degman’s underpig hero to vibrant life, capturing the gleam of determination in his eye as he does pushups and his happy exhaustion after collapsing into a haystack after a day of training. After Norbert nearly gives up, unable to locate his destination, Degman supplies a happy ending, though it’s an unearned one—there’s no indication of why the other pigs go from snickering and snorting at Norbert to celebrating him with a channel that lets him live out his dream right there on the farm.

Lori Degman believes in dreaming big – just like Norbert! She followed her first dream of being a teacher of Deaf & Hard of Hearing kids; her second dream of being a wife and mother; and her third dream of becoming a published picture book author! She is the award-winning author of 1 Zany Zoo and Cock-a-Doodle Oops! Ms. Degman lives in a suburb of Chicago with her husband, two dogs and two grown sons (when they come back to visit).

Marco Bucci recognized two things at a young age. The first was that he wanted to become a professional artist. The second was that he couldn't draw. This delayed him for quite some time. He filled that time pursuing other artistic interests such as music and writing. But the urge to draw never left him. At age nineteen he began to study classical drawing, which led him to kindle a love for painting and illustration. He hasn't looked back since. Marco lives with his wife and cat in the tiny town of Claremont, Canada.