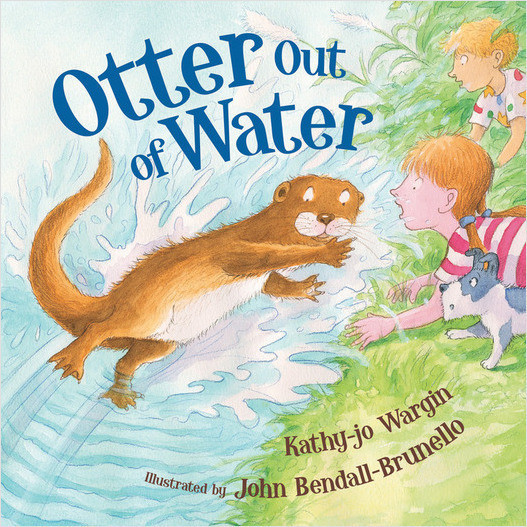 Otter Out of Water

Have you seen an otter at play in the water? It's long and it's trim and it knows how to swim. It rolls and it spins. It twists and it grins. What if one day that otter jumps out of the water? Would you ask him to play? What if that otter follows you home? Would he bounce on the chairs? Would he skid down the stairs? The author-illustrator team who created Scare a Bear and Moose on the Loose will once again have readers laughing and guessing. This time the hilarity involves an otter out of water!

Otter Out of Water

Wargin and Bendall-Brunello team up again, this time asking their young readers, “But what if that otter/jumps out of the water?/Would you shout hip-hooray?/Would you ask him to play?/Would you clap?/Would you stomp?/Would you go for a romp?/What if that otter jumps out of the water?” The comical story continues as the mischievous creature follows two children home and begins to cause trouble. Wargin includes plenty of jaunty, interactive rhymes, making this story an excellent read-aloud. Bendall-Brunello’s illustrations are colorful and droll, matching the humorous tone of the text, as does the font, which is as bold and energetic as the impish otter. Children will laugh along with its playful antics and particularly enjoy the surprising and appropriately silly ending, in which the otter’s whole family arrives to cause even more hilarious mayhem.

John Bendall-Brunello is the youngest of nine children, bought up in a chaotic household with numerous pets including mice, guinea-pigs, cats, and rabbits. He began drawing from quite a young age, and especially loves illustrating animals and children, capturing movement and life within simple and bold compositions. He has illustrated over 60 children's books published in England and the U.S. John and his wife, Tiziana, live part of the year in Cambridge, England, and part in Cannes in the South of France.