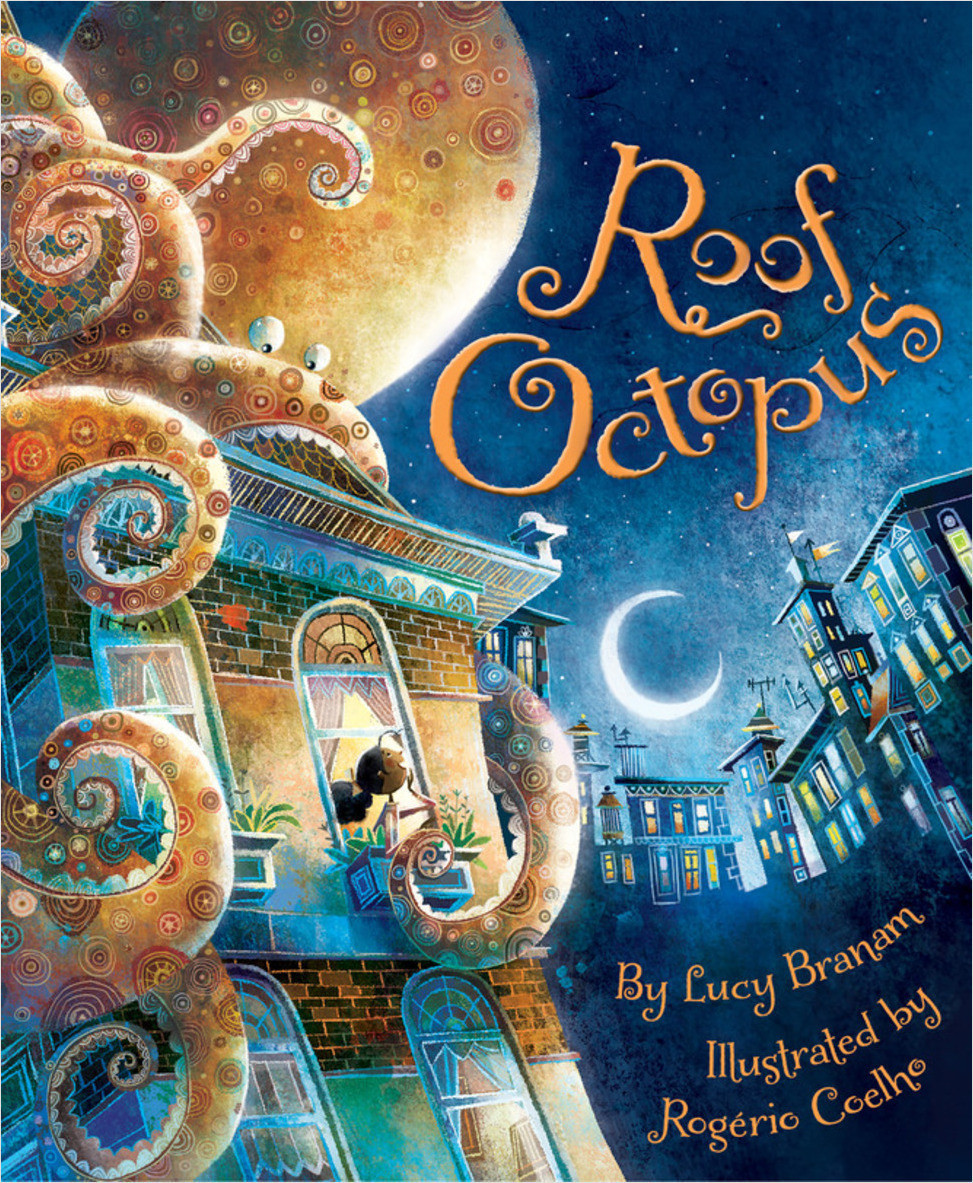 When Nora hears a soft "tap, tap, tap" at her bedroom window she never expects it to be the tentacle of a very large octopus, but that's exactly what it is--an octopus on her apartment building. The octopus turns out to be a very neighborly sort of octopus, helping the residents to wash their cars or weed the window boxes, and Nora makes fast friends with him. But one morning, the octopus is nowhere in sight. Has he moved on already? And just when Nora wanted to bring him for Show and Tell!

What could be more delightful than a huge and friendly octopus on the roof? That at least is the premise of Branam’s debut—which Coelho (Boat of Dreams, 2017) illuminates with views, usually canted or vertiginously angled, of a smiling, golden cephalopod hanging colorfully spotted tentacles down the sides of a city apartment building. Young Nora (brown-skinned like her parents and some of her neighbors and friends) is certainly wonderstruck when it taps on her bedroom window. Although the initial reactions of the grown-ups are a bit mixed (“they all went on to work and school and tried not to make eye-contact with it”), the way it lifts residents to their apartments, helps with small chores, and swings children back and forth soon wins everyone over. Her father’s wonderful if seemingly witless suggestion that the genial giant might be making a migratory rest stop actually gains credence when it disappears after Nora murmurs something about bringing it to show-and-tell at school. But that Friday there’s a tap…on her classroom window. Coelho’s illustrations have the geometric look of Lane Smith’s, higgledy-piggledy angles lending great energy to the proceedings. Even better than a crocodile in the bathtub.

Lucy Branam is a young writer who hopes that as she ages, her bio will get longer and more interesting. For now, she lives and reads in Jacksboro, Tennessee. She graduated from the University of Tennessee and earned a communication graphics technology degree from Pellissippi State in 2017 to chase her dream of graphic designing. This is her debut children’s picture book.

Born in São Paulo, Brazil, Rogério Coelho lives in Curitiba, a city in southern Brazil, with his family. He has been drawing since forever and has illustrated more than one hundred books for publishers in Brazil and the United States, including Books Do Not Have Wings. Besides his work on books, Rogério also illustrates for magazines and comics. He has received several awards for his work, including the Jabuti prize in 2012 and 2016. In 2017 he received the gold medal in the Independent Publisher Book Awards for his illustrated book Boat of Dreams.