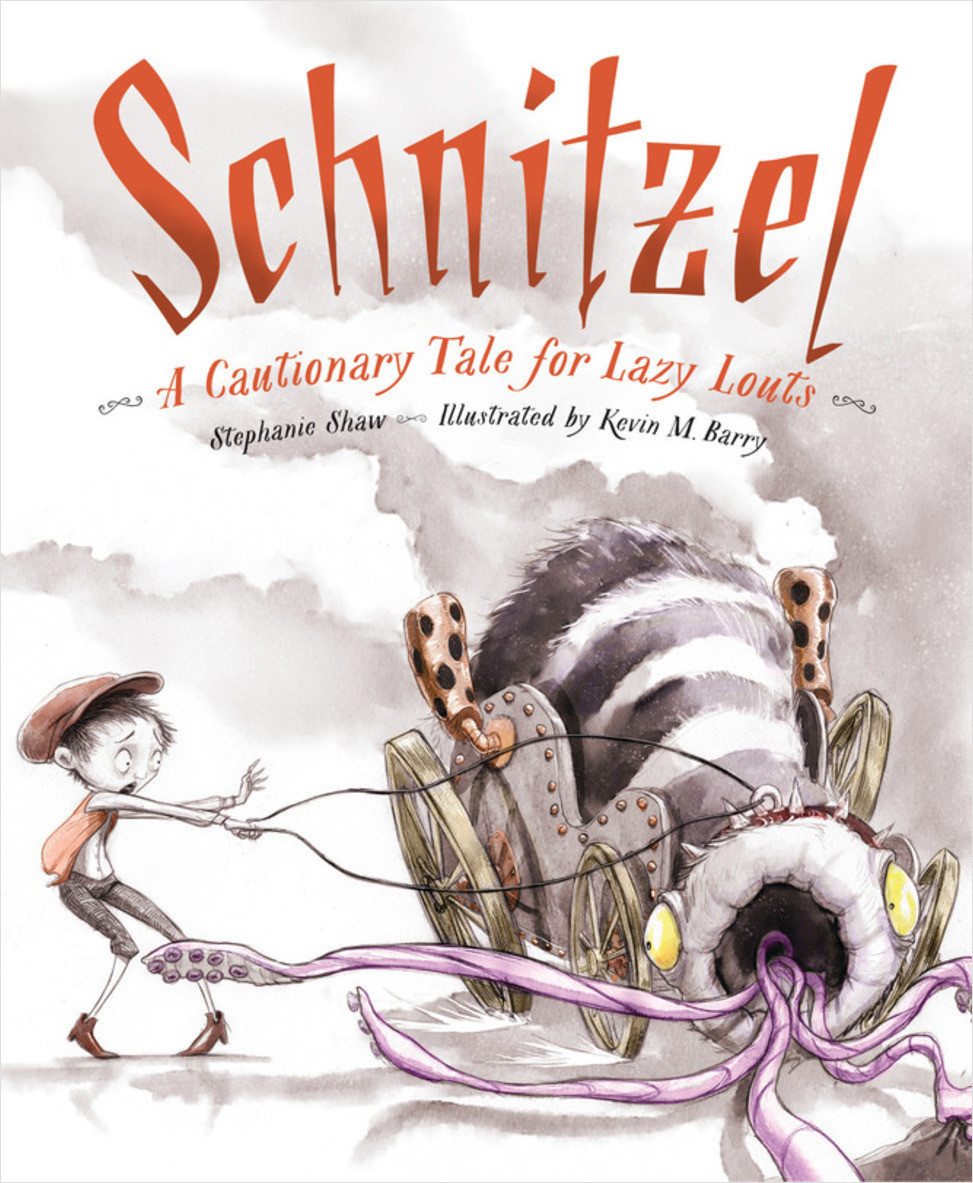 A Cautionary Tale for Lazy Louts

Apprenticed to a famous wizard, young Schnitzel is not known for his hard work. In fact, it's just the opposite. He's lazy and lacks motivation. So late one night, when a door-to-door salesman selling vacuum cleaners offers to help, Schnitzel sees an answer to his housecleaning woes. Little does he know, however, that this is no ordinary salesman and the vacuum is no ordinary dust-buster. In this retelling of the classic tale The Sorcerer's Apprentice, Schnitzel is about to find out why it's never a good idea to invite a cape-wearing, fang-toothed stranger in after dark. Fortunately for him, there's magical help ready to lend a hand.

The Sorcerer’s Apprentice" gets a new treatment as Schnitzel, apprentice to the renowned wizard Sir Willabald, is loath to tackle the housekeeping. The weedy, white youth, a self-described “lazy lout,” especially dislikes vacuuming, as he must use a temperamental, purple-tentacled beast of a machine. When a fanged salesman who resembles Bela Lugosi appears at midnight with a “Goooood evening,” the apprentice is more than happy to accept his offer to demonstrate the power of his fire-spewing vacuum cleaner. Echoes of The Cat in Hat abound, from the reference to the vacuum as “The Thing,” its red-and-white-striped bag, an umbrella stand, and the story itself, which the apprentice recounts in rhyming, first-person verse. The stranger is revealed to be a vampire when he threatens to bite the apprentice’s neck. Just in time, Sir Willabald restores order to the household with a great “POOF” of his wand in an expansive and very effective double-page spread. Primarily illustrated in gray-toned watercolors, splashes of color highlight the action. Pale, cartoonlike characters with outsized features match the lively text with exaggerated movements. Children will enjoy watching a housecat’s often hilarious reactions to the events throughout. An author’s note gives a brief history of the traditional story and some suggestions to children for writing their own version. Just enough creepiness for a Halloween read-aloud.

In this clever retelling of “The Sorcerer’s Apprentice,” lazy Schnitzel, in an effort to avoid the household chores assigned to him by the wizard Willibald, accepts the offer of a door-to-door vacuum cleaner salesman for a free demonstration. However, the Thing not only gobbles up cobwebs and mud, it also consumes the contents of the house and eventually the house itself. Just as the salesman is about to nibble on Schnitzel himself, the wizard appears and with a single “poof” restores all to normalcy. Schnitzel has learned his lesson the hard way and performs his chores with alacrity from that point on. The story is told in verse and flows easily with no sour notes and would be a pleasure to read aloud. The illustrations, done in varying shades of gray with the occasional splash of red, swirl across the pages and pleasantly capture the energy of the tale. An author’s note at the end gives the history of the work and offers suggestions for creating your own version of this old poem. VERDICT An interesting adaptation that should have substantial appeal and be a worthwhile addition for most collections.

Shaw warns readers of the perils of laziness in this retelling of Goethe’s “The Sorcerer’s Apprentice,” while Barry sets the eerie, gothic mood with his Gorey-esque, watercolor-and-ink illustrations, sparingly scattering color over gray-washed scenes. The tale begins in a dusty stone castle, where lazy young Schnitzel is apprenticed to the renowned wizard Sir Willibald. In lieu of a magical education, however, the boy is expected to clean the castle without the help of spells. One night, Schnitzel is saved from the horrors of vacuuming (the appliance is a literal beast!) by the serendipitous arrival of a vacuum-cleaner salesman, eager to be of service. Unfazed by the stranger’s pointy fangs and opera cloak, Schnitzel invites the salesman in, with catastrophic results. Only through Sir Willibald’s intervention does Schnitzel live to clean another day and finally learn the value of hard work. Large-scale illustrations and rhythmic text make this cautionary tale an entertaining read-aloud, and the concluding author’s note on the story’s source prompts readers to create their own versions.

Stephanie Shaw is an Oregonian native, thrilled to have plenty of weather-related reasons to stay indoors reading and writing. A former teacher and school administrator, Stephanie lives in Petaluma, California.

Kevin Barry has lived most of his life surrounded by fur balls, literal and metaphorical. Some of these feline friends curl up nightly at his feet. Others purr softly in his heart and memories. When not rescuing mouse-shaped toys from the depths of the couch, Kevin can be found at the drawing table or the white board, teaching kids about the many magical storytelling tools of writers and illustrators. He lives near Boston, Massachusetts. Visit Kevin at kevinbarryillustration.com.