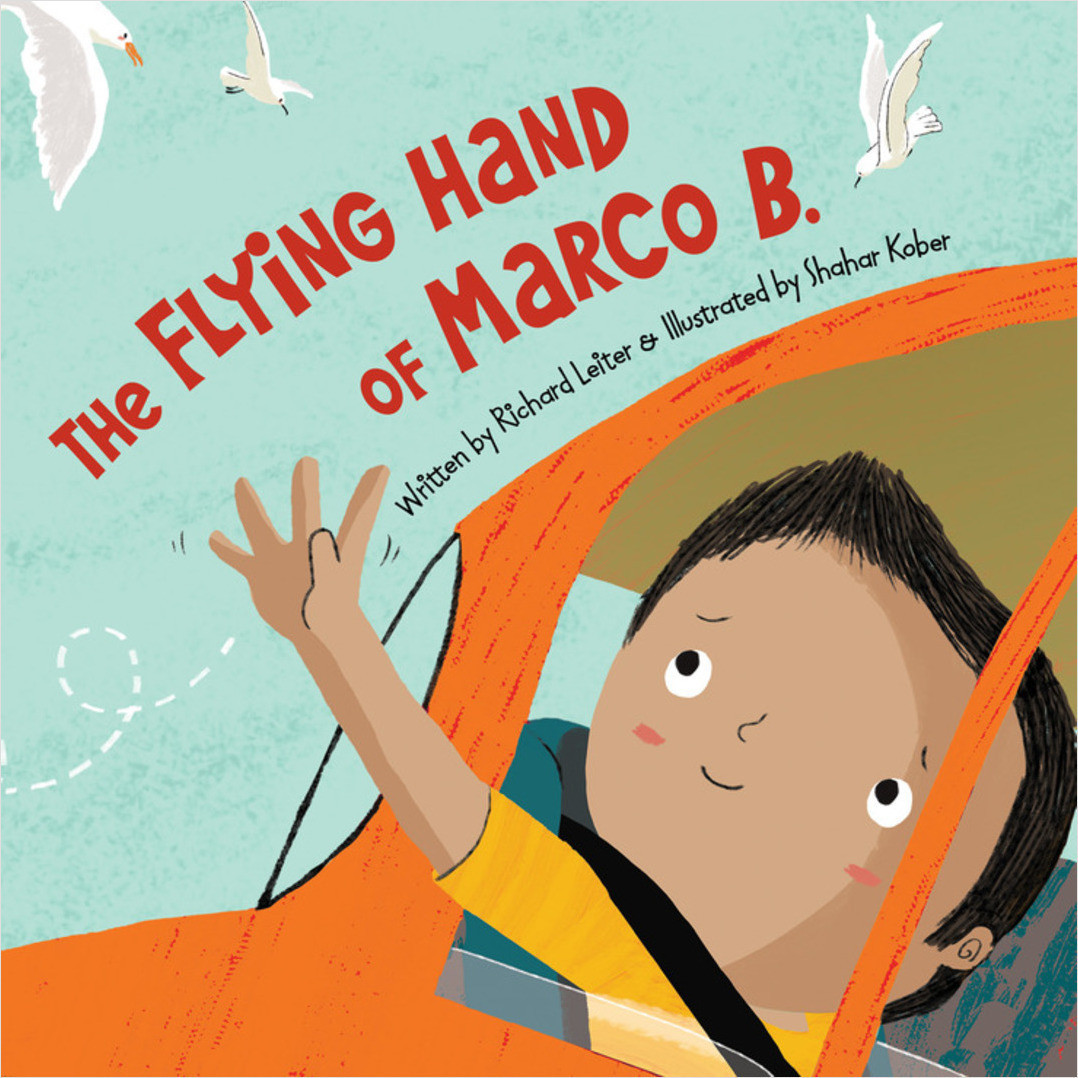 The Flying Hand of Marco B.

A routine ride in the backseat of his parents' car takes a fantastical turn when a young boy opens the car door window. With the click of the seat belt and door locks, Marco B. is securely tucked into the backseat of his parents' car, heading out on a family errand. With the car window opened to the fresh air, this could be the start of any routine trip. But not if you're Marco B. and most certainly not if you're Marco B.'s hand! As the car travels along and the scenery rushes by, Marco B. puts his hand out the window and fantasizes about flying. And once his hand has felt the wind rushing around it, it has no intention of staying in the car. Marco B. soon finds himself on a wild ride up in the sky. Told in rhyming text.

School Library Journal - The Flying Hand of Marco B.

Though little Marco’s mother keeps asking him to keep his hand inside the car while it’s moving, he can’t resist the temptation. Soon he is sucked out the window and soars up to the clouds, greeting birds, all led by his flying hand. When Marco makes it all the way to outer space and sees an alien spaceship, he decides it’s all a bit too scary and wants to go home. He points himself back down and tumbles back into the moving car, with his family none the wiser. The rhyming text and bright, cartoonish illustrations full of fantastical details such as helium balloons in space make it clear that it’s Marco’s imagination that is really taking the trip. VERDICT A slight but pleasant tale about a common childhood fascination.

Booklist - The Flying Hand of Marco B.

This fanciful picture book plays upon the idea of a simple delight that turns into an unexpected flight. Marco B. is safely buckled up in the backseat of the car, his hand sneaking out the window to swoop and soar in the breeze. His mother tells him to keep his hand inside, but it keeps breaking free. “Why can’t the grown-ups understand? / I can’t control this crazy hand.” That’s not a false statement, because the flying hand of Marco B. catches on the wind, and he is pulled out of the car and up into the sky. Marco B.’s flight is exhilarating and frightening. And probably not his last. The breezy rhyming text reads easily and sets the pace for Marco B.’s flight. Kober’s illustrations have a fluidity that moves with the story and helps the reader fly along with Marco B. Whimsical and surprising, this elevates an everyday car ride from mundane
to majestic.

Publishers Weekly - The Flying Hand of Marco B.

Like many parents, Marco’s mother cautions her son to keep his hand inside the car while they’re driving; like many kids, he doesn’t listen. But after Marco is swept out the window and into the sky, his initial glee turns to worry: “The earth’s so big, so blue, so vast./ How’d I get so high… so fast?/ It’s scary this far off the ground./ How’m I gonna get back down?” Leiter’s background in creating advertising jingles is on full display in his first children’s book; there are very few hiccups in his colloquial, syncopated rhymes, which virtually beg to be set to music. Despite Marco’s fears as he enters the stratosphere, Kober (the Engineer Ari series) keeps the mood light: as Marco hovers far above the Earth, he shares (outer) space with a three-eyed alien in a flying saucer, a Laika-esque dog in a space capsule, and a stray astronaut who has snagged an orange balloon that has floated up along with Marco. It’s a cheerful flight of fancy that should send imaginations soaring. Ages 5–7.

Kirkus Reviews - The Flying Hand of Marco B.

Just how high can a wayward hand fly? Marco B. and his family are on a road trip. With his window rolled down, he sticks his hand out and lets it glide and soar on the breezes. "My fingers float without a care / But as I’m swooping through the air / My mommy’s voice yells from afar, / ‘Please get your hand back in the car!’ " But his parents just don’t understand that his hand just has to fly. The last time it sneaks out, Marco’s sucked out too. He soars above the car, then above the town, then he’s above the Earth with the astronauts and ETs, and he’s scared. “If only I could make this end / I’d NEVER fly the hand again. / I curl into a little ball / And just like that… / …I start to fall.” He zooms back to the car and promises himself he won’t fly his hand again…but that may not be a promise he can keep. Musician and adman Leiter’s debut’s a rhyming romp of creative play, and Marco’s quick trip into the sky will be familiar to imaginative tots. Israeli illustrator Kober’s soaring, colorful illustrations are an ideal match. He renders Marco with light-brown skin and short, straight black hair that almost comes to a kewpie curl in front. Little listeners will be hoping their hands will take flight on their next road trips. (Picture book. 3-6)

Shahar Koher is a freelance illustrator, living and working in Israel. His artwork has been featured in newspapers and magazines, as well as in children’s books.