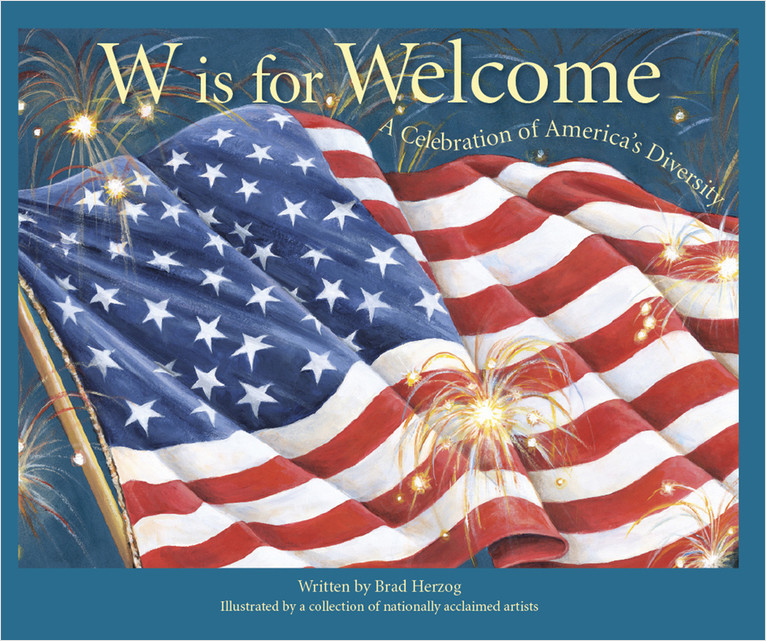 W is for Welcome

A Celebration of America's Diversity

Following the alphabet this book uses poetry and expository text to celebrate America's diverse population and showcase the remarkable achievements and contributions that have come from the many people who have chosen to make our country their home. Topics include well-known landmarks and institutions (the Statue of Liberty and the White House, our national parks system) and famous citizens whose talents helped make the United States a world leader (Albert Einstein and Madeleine Albright). In addition to celebrating America's history and development, key concepts such as naturalization and steps to citizenship are explained in easy-to-understand terms for the young reader.

Booklist - W is for Welcome

Organized as an abecedary, this book celebrates immigration by painting a picture of the variety of paths taken by people who have settled America over the centuries. Letters of the alphabet are matched with concepts such as freedom, liberty, and heroes, which are accompanied by brief explications, terse quintains, and illustrations by a variety of artists. Herzog notes familiar aspects of history, such as the theory that Native Americans crossed the Bering Strait, the arrival of the Mayflower, and the work of Chinese and Irish immigrants on the Transcontinental Railroad. Also noted are the cultural contributions of immigrants such as Levi Strauss, Albert Einstein, and John Muir. But the most interesting aspect of the book is that it provides explanations of the less romantic elements of immigration: the push factors such as war, persecution, and poverty; the lengthy complications of the naturalization process; and the privileges of citizenship. Middle-school teachers might use these points as springboards to discuss the struggles of adaptation and controversy of assimilation.

W is for Welcome: A Celebration of America's Diversity - Teaching Guide

Chicago native Brad Herzog's first published story was the tale of his brief stint as a big league bat boy. He has watched the Cubs play from the box seats, the bleachers, the press box, even the Wrigleyville rooftops. Among his numerous books for Sleeping Bear Press are baseball books--H is for Home Run, Full Count, Little Baseball, I Spy With My Little Eye Baseball, and W is for Wrigley: The Friendly Confines Alphabet. A multiple winner from the Council for Advancement and Support of Education, Brad has written dozens of other books about subjects ranging from soccer and small-town America to civil rights and saving the planet. He now lives on California's Monterey Peninsula with his wife, but visits schools around the country as a guest author, inspiring students about the joys of reading and writing and the possibilities of imagination.

A graduate of the Columbus College of Art & Design in Columbus, Ohio, Doug Bowles has been a freelance illustrator for 20 years. In addition to Doug's illustrations for children, he enjoys working with a wide range of clients in the advertising, corporate and editorial communities. His work has been selected many times in the Society of Illustrators West competition, and he has had several gallery showings. Doug lives in Leawood, Kansas, with his wife and two children.

David Gardner is an award-winning illustrator and visual development artist. Before going freelance, he was an artist for several animation studios, including Walt Disney Animation Studios. His work has appeared in magazines, including Cricket and Cobblestone, and he has illustrated numerous picture books, including the historical biographies The Harvey Milk Story and Sarah Gives Thanks. A longtime member of the Society of Children’s Books Writers and Illustrators, Mr. Gardner teaches illustration at Ringling College of Art and Design. To learn more about his work, please visit him at FlyingDogStudio.com.

Barbara Leonard Gibson received her B.F.A. from Carnegie Mellon University. She illustrated more than three dozen books including The Nutmeg Adventure; A Picture-Perfect World; Let's Explore a Tropical Forest; Hide & Seek; the National Geographic Society's award-winning pop-up book, Creatures of the Desert World; and the six-book collection, The Little Learner's Library I. She also illustrated Patricia Cornwell's Life's Little Fable and best-selling children's author Audrey Penn's The Whistling Tree and A Pocket Full of Kisses.An ardent environmentalist, she specialized in horse, wildlife and nature illustration. Barbara passed away in 2018, but she was often found either at the small farm where her two horses are boarded, or at a therapeutic riding center where she volunteers her time. She and her composer husband, Robert, lived in Olney, Maryland with their dog, Sadie. Their grown daughter Caitlin lives nearby.

Renée Graef and her children spent many of her birthdays walking the 990-foot breakwater to reach the Port Washington Lighthouse. She has illustrated over 80 books for children including T is for Time; D is for Dala Horse: A Nordic Countries Alphabet; the “Kirsten” books in the American Girl Collection; and many of the My First Little House books by Laura Ingalls Wilder. Renée splits her time between Milwaukee, Wisconsin, and Los Angeles, California. Learn more about her work at www.reneegraef.com.

Award-winning artist Susan Guy is known for her colorful paintings of equine and western themes. Her work is displayed in numerous galleries and exhibitions across the country, such as the prestigious Arts for the Parks competition in Jackson, Wyoming, and the American Academy of Equine Art in Lexington, Kentucky. One of her paintings is also included in the permanent collection of the Phippen Museum in Prescott, Arizona.

The art of Ross B. Young is often associated with paintings of the world's greatest sporting dogs. He also paints wildlife and landscapes. Ross has been a professional artist since he received his Masters of Arts in Painting from the University of Tulsa in 1980. His artwork has been displayed in national and international art shows, galleries and museums. It has also been in or on the covers of many magazines and books. Ross regularly shares his expertise and his love of art with children by speaking to local elementary classrooms and judging elementary art shows. Ross and his wife, Judy, live in the country near Springfield, Missouri. They have a daughter, Brett, a son, Reid, and five dogs.

Helle Urban, a Parker, Colorado, resident, has been an illustrator for more than 20 years. She earned her Bachelor of Fine Arts in illustration from Art Center College of Design in Pasadena, California. Helle has illustrated numerous children's books, painted portraits of families and was a background artist in the animation industry. Helle's work has also been displayed in numerous galleries.

Laura Knorr was born and raised in northeastern Pennsylvania and remarks, "I may have left that delightful state but it is home in my heart wherever I may go."She graduated with a Bachelor's of Fine Arts in Illustration from Ringling School of Art and Design in Sarasota, Florida, and has worked as a freelance illustrator for a handful of years. Laura lives in Commerce, GA.