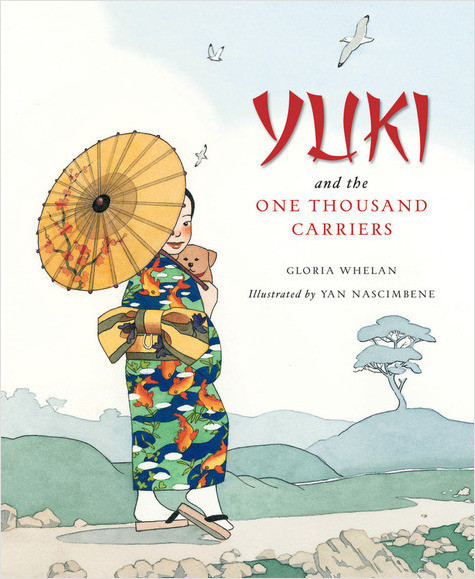 Yuki and the One Thousand Carriers

In the seventeenth and eighteenth centuries, Japanese provincial governors had to travel between the cities of Kyoto and Edo (modern-day Tokyo). This 300+ mile journey on the historic Tokaido Road required the presence of one to three thousand attendants (carriers). Yuki's father has been called to Edo and she, along with her mother and pet dog, must accompany him in this royal procession. Yuki does not want to go. She will miss her home and her teacher. But she must not be disrespectful so Yuki captures her thoughts in haiku, a Japanese form of poetry. Once outside the gate How will I find my way back? Will home disappear? Inspired by the woodcuts of Japanese printmaker, Hiroshige, award-winning author Gloria Whelan brings a cultural event to life through the observant eyes and thoughtful verses of a young Japanese girl. Gloria Whelan's many award-winning books include Homeless Bird for which she received the National Book Award. Her work with Sleeping Bear Press includes Yatandou and Mackinac Bridge: The Five-Mile Poem (a 2007 Michigan Notable Book). Ms. Whelan lives in Grosse Pointe Woods, Michigan. Yan Nascimbene studied at the School of Visual Arts in New York and at the University of California at Davis. His work has appeared in numerous publications including TIME. He has illustrated over 50 books, including Hachiko: The True Story of a Loyal Dog. Yan twice received the Society of Illustrators' Silver Medal and many other awards.

Yuki and the One Thousand Carriers - Teaching Guide

Half-French and half-Italian, Yan Nascimbene spent his childhood and adolescence between Paris, Turin, and the south of France before moving to the United States where, as an art student, he met his wife Joan, a painter, writer and ceramist. Yan has drawn over 300 book covers and 40 fully illustrated books, some of which he wrote. His previous children's books include Hachiko: The True Story of a Loyal Dog and Castle of Books.Widely exhibited in France, Italy, the United States and Japan, Yan was awarded the Society of Illustrators' Silver Medal twice and the Bologna International Book-fair Graphic Award three times.