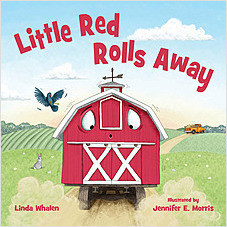 Little Red, a small barn, is moved from his home, much to his distress.Red wakes up one morning to find that his friends Bossy Cow, Piglet, and Rooster are missing. It gets worse. Machines rumble in, hoist up Red, and haul him away, first on a flatbed truck and then on a barge. As Red moves farther away from his familiar setting, he feels more and more insecure about where he is going. Whalen neatly describes both the anxiety and the powerlessness Red feels (although her overuse of the rule of three in her patterned repetition of phrases does undermine the story’s freshness). Morris’ vibrantly colored cartoony illustrations depict an anthropomorphic Red, whose expressions as he is carted hither and yon lend gentle humor. The humans depicted are predominantly white, although other ethnicities are shown. Little Red’s journey ends in an amusement park’s petting zoo, as he is reunited once again with his animal friends and “even new friends to get to know!” The story’s overt message is solidified by the last page, titled “How to Help a Child Navigate Change,” by Whalen and Susan Hall, an early-childhood specialist. It gives a brief overview of the anxieties children may feel when encountering change such as a move, with suggestions of how to help. Designed to address the anxieties moving holds for children, this book is competent and clear. (Picture book. 3-7)