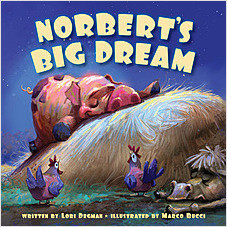 While most pigs are satisfied with lolling around in the mud and sucking down slop, Norbert has other ambitions: “Since he was a wee piglet, Norbert dreamed of swimming the English Channel,” writes Degman (Cock-a-Doodle-Oops!). Norbert “practice[s] his flutter kick” in the mud, “munche[s] muscle-building foods,” and endures the taunts of his fellow pigs, who think his idea is ridiculous. But when the time finally comes to put his plans into action, there’s just one problem: where exactly is the English Channel, again? Using bright, thick, painterly swaths of color, Bucci brings Degman’s underpig hero to vibrant life, capturing the gleam of determination in his eye as he does pushups and his happy exhaustion after collapsing into a haystack after a day of training. After Norbert nearly gives up, unable to locate his destination, Degman supplies a happy ending, though it’s an unearned one—there’s no indication of why the other pigs go from snickering and snorting at Norbert to celebrating him with a channel that lets him live out his dream right there on the farm.