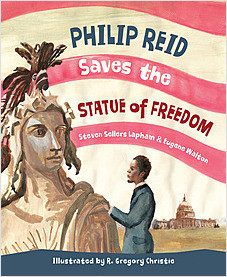 As a child, Reid learned to work with clay and wood from an older slave on a plantation in South Carolina. Sold to Clark Mills, a sculptor, Reid mastered the skills required to create bronze statues. When Mills was commissioned to cast the plaster mold of the Statue of Freedom in 1859, he took Reid with him. To everyone’s consternation, the plaster model was in one piece, and the Italian craftsman responsible for this wanted more money to disassemble it into its constituent parts. It was Reid who carefully determined where the seams were so that the mold could be separated and moved to a foundry to be cast. During the Civil War, the statue was placed on the Capitol dome, and slaves in the District of Columbia were granted emancipation. Paperwork from Reid’s owner requesting promised payment for his manumitted slaves is reproduced on the endpapers. Lapham and Walton invent dialogue in their narration, but they make Reid’s work exciting and provide a good picture of what little is known of him. Christie’s paintings are characteristically powerful, more impressionistic than realistic. A photograph of the statue, sources and further reading would have been a plus.
A good introduction to the growing knowledge of the vital role slaves played in building Washington, D.C. (epilogue, authors’ note) (Picture book. 4-7)