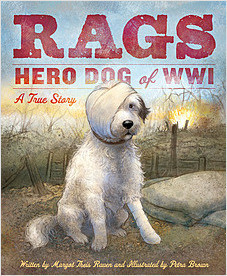 Gr 1–4—This heartfelt story introduces a heroic and lovable dog that was found in a Paris doorway by an American soldier during World War I. Private James Donovan and Rags became fast friends, and Rags was whisked off into U.S. Army service, where he learned to root out rats and mice from the trenches, transport important messages across the battlefield, and even to salute his superiors. The picture-book format and accessible narrative make for excellent storytime sharing. There has been a spate of books about dogs serving in wars recently, including Sheila Keenan’s graphic novel Dogs of War (Scholastic, 2013) and Ann Bausum’s Stubby the War Dog (National Geographic, 2014), both for slightly older students and offering more context and historical information. Rags is a fine introduction to the notion of dogs being included in military service for younger elementary students. The artwork is lively and sweet, with a soft palette of colors depicting many of the scenes. It breathes life into the text and creates an endearing character in Rags. An epilogue and author’s note add some detail to the story, but no bibliographic or source information is included. Share this title with dog lovers and young history buffs, who will enjoy the combination.—Jody Kopple, Shady Hill School, Cambridge, MA