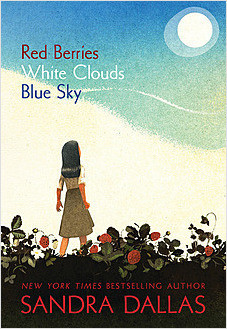 Dallas revisits the setting of her best-selling adult novel Tallgrass (2007) in this fictionalized view of U.S. internment camps during WWII. Twelve-year-old Tomi is as American as the strawberries that grow behind her California home, even though both of her parents were born in Japan. When the U.S. declares war against Japan in 1941, she is suddenly perceived as a traitor in her own country. First Pop is taken away. Then Tomi, her mother, and her brother are forced to leave home, assigned to live in a horse stall at a racetrack before moving to an internment camp, Tallgrass, near Ellis, Colorado. At first the camp residents keep their distance from one another. But, like Opal in Kate DiCamillo’s Because of Winn-Dixie (2000), Tomi begins making peace with her situation through friendships with others. She and her new friend Ruth scheme up ways to create a sense of community in Tallgrass. The result is a realistic portrayal of the internment camps, brightened by the determination of one girl to remain true to her optimistic spirit.