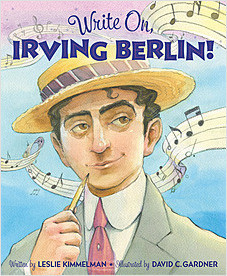 A Jewish immigrant’s passage from pogroms in Russia to “God Bless America”—written 100 years ago to celebrate his beloved adopted home. Irving Berlin, born in 1888, was just a child when his family and so many others fled terror directed at Jews in czarist Russia for New York City’s Lower East Side. It was a crowded, dirty, and very poor neighborhood of immigrants, but it allowed a musical boy who had never studied music to grow up and write songs. Israel, his given name, was not a good student in school, but, a cantor’s son, he had a head full of tunes. Early success led to music composed for fellow soldiers during World War I and then music written for Broadway and the movies. It was during World War II that he “took out and polished up a song he’d written long ago.” That song was “God Bless America,” which is still sung and loved—albeit over the initial protests of those who were not pleased that a Jewish immigrant was the composer and lyricist. “White Christmas,” written during World War II, was also immediately taken to heart despite the same racist, nativist objections. More success and many more great and still popular songs followed. Gardner’s illustrations are colorful and soft-textured, displaying many smiling faces of Berlin as he ages. Musical notes swirl through the pages. Heartwarming Americana.